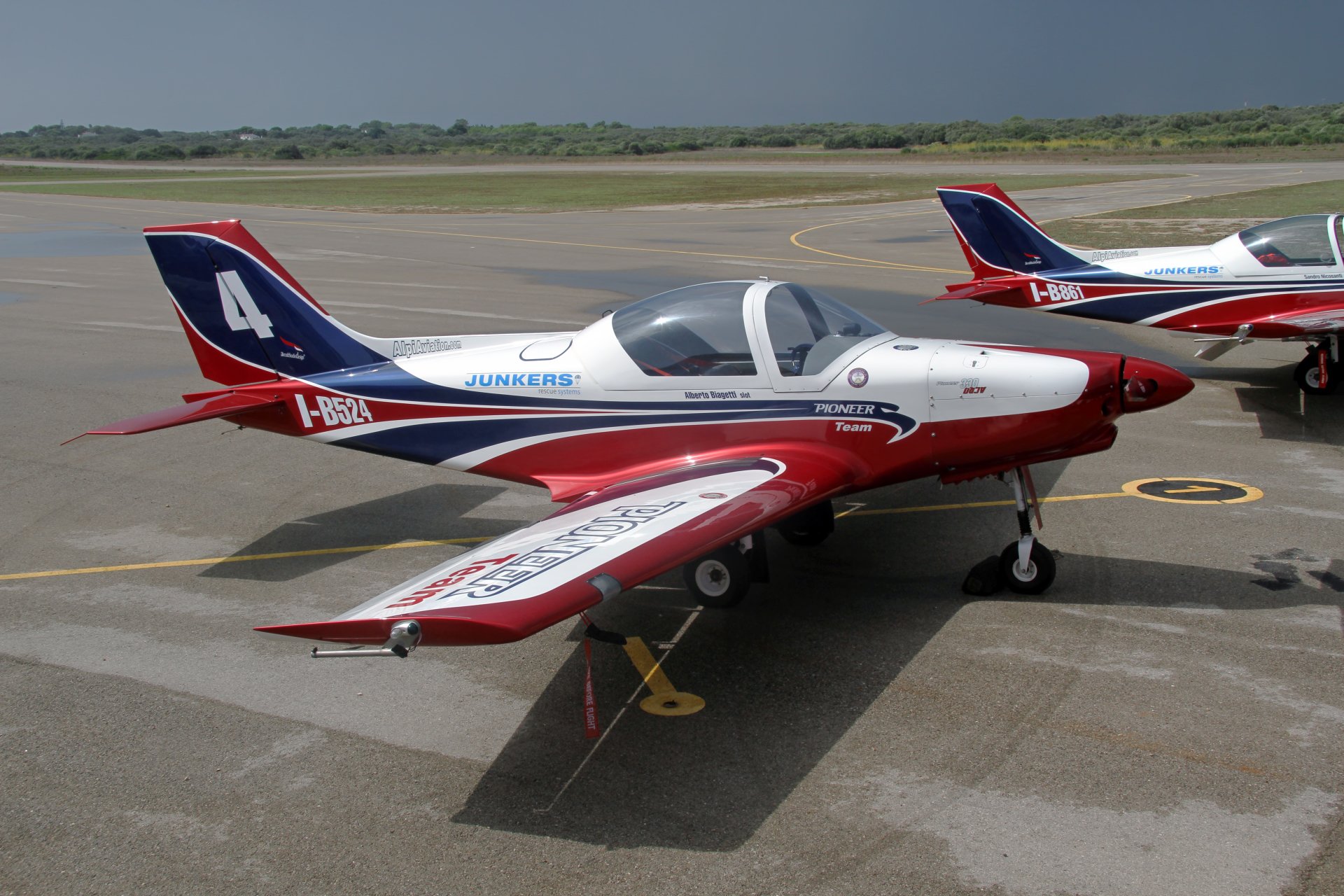 The event took place on the South coast of Menorca along the straight sandy beach of Son Bou on the 15th September 2019. Despite the bad weather leading up to the event, the 15th was a perfect Mediterranean summer’s day with blue skies.

The Real Aeroclub de Mahon, Menorca were up next, with a single Piper PA-28 and an AISA I-11B Peque performing a number straight passes at low level along the beach.

The Guardia Civil EC-135 helicopter gave a short SAR demo just off the beach with a small rib. These helicopters are fitted for many roles, surveillance, SAR, medivac to name a few.

The Pioneer Team from Italy founded in 2005 by a group of flight instructors and pilots with their Pioneer 330 Acro’s and 300 Hawk, performing a very tight formation aerobatics routine. They kept very close to the crowdline due to the manoeuvrability of the aircraft. The team was trained by ex. Frecce Tricolori pilots. For more info check out their website www.pioneerteam.it

Spanish Air Force Canadair CL-215T performed with a series low fly pasts including scooping up and releasing it during the flypasts to show how it fights fire thoughout Spain and the world. Based at Port de Pollensa, Mallorca and part of 43 Gruppo, they are frequently seen flying around the coastline of Menorca.

The Search and Rescue demonstration was performed by a CASA/Airtech CN.235-100MPA, Based at Son San Juan Air Base (Aeropuerto Palma de Mallorca) and operated by Esc 801 of Ala49 whose primary role is to carry out maritime surveillance SAR in support of military operations and combat SAR.

Solo demonstration by Juan Velarde in his Zivko Edge 540 V2 aerobatic aircraft was truly exceptional, as one would expect from an Aerobatic pilot with two gold, four silver and one bronze medal in Spain’s National Aerobatic Championships. He is also an airline pilot for Iberia on the Airbus A330. The Zivko Edge is manufactured from mostly carbon and composite materials and being extremely light, fast and having a 300hp engine, it performing seemingly impossible manoeuvres and superb knife edge passes.

The climax of the show came with the Spanish Air Force McDonnell Douglas EF-18A Hornet from Ala 15 based at Zaragosa Air Base. A superb show of high power manoeuvres, fast passes, slow passes including one very slow with the undercarriage and flaps all down. Using the callsgn Toro, Majxxxx certainly didn’t disappoint the 1000s on the beach

All together an enjoyable small show put together well, despite weather cancellations from Southern Spain. We certainly hope that this is not as rumour suggest and only a one off.