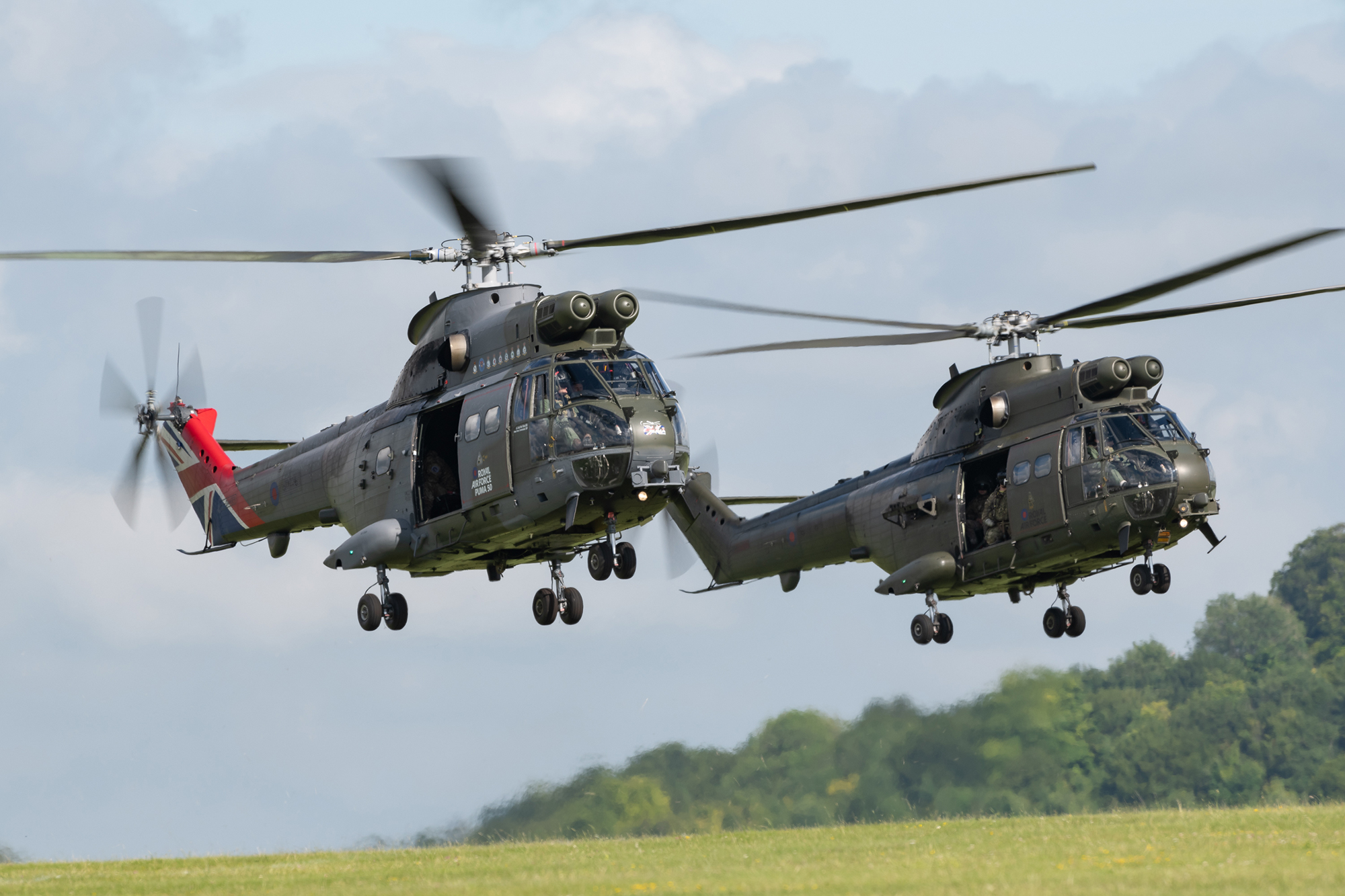 RAF Benson and Joint Helicopter Command have celebrated half a century of RAF Westland Puma operations with a ten-ship formation flypast of military installations and facilities across the south of England and the East and West Midlands on July 7.

Departing Benson, the type’s base, the formation initially flew east towards Halton, Northolt, Hendon and Imperial War Museum Duxford before heading north to Wittering, Barkston Heath, Cranwell, Waddington and Scampton. From the Red Arrows’ home, the ten-strong balbo flew over the National Memorial Arboretum at Alrewas, Staffordshire, then on to MOD Stafford, Shawbury, Shobdon Airfield and Credenhill, Warminster on Salisbury Plain, MOD Boscombe Down and AAC Middle Wallop . Returning to Benson, the flight took in JHC Command in Andover, Odiham, RMA Sandhurst and Farnborough.

The tour of airfields came less than a week after Puma HC.2, XW224, was unveiled in a new commemorative livery celebrating the 50th anniversary. The scheme is like that worn by the first Puma HC.1s from 1971. It also incorporates the union jack – painted on the fin – and the insignia of past and present RAF Puma squadrons. The RAF logo on the cabin doors has had the Puma 50 titles added to it.

The first contract placed with Westland Aircraft Ltd for the SNIAS/Westland Puma HC.1 accounted for 40 aircraft XW198-237, all were built at Hayes with deliveries commencing with XW198 and 199 on 29/1/71. A single pre-production SA330 registration F-ZJUX c/n08 built by SUD Aviation in Marignane was delivered to Westland Helicopters Ltd on 19 October 1968 as XW241 for use as a pattern aircraft.

The Puma, a medium-lift support helicopter, has flown on combat and humanitarian operations all over the globe over the last five decades, these include Northern Ireland, Bosnia, Kosovo, Iraq, Afghanistan, Mozambique and the Caribbean.  The Puma has also supported Defence in the UK such as providing helicopter lift capability to flood relief efforts and the coronavirus pandemic. The Puma force remains on standby 24/7 to support any task required in the UK.

The Puma lacked power in the hot-and-high conditions of the Afghan summer, and in its mountains, leaving it short of lift and largely unsuitable for sustained deployment. It was therefore decided that the Mk.1 needed a dramatic upgrade which was to be applied to 24 airframes, replacing the 2 x Turbomeca Turmo 111-C4 engines with the Turbomeca Makila 1A1 turboshaft engines off the Super Puma, advanced digital avionics and more fuel capacity, among other significant changes.

The work was undertaken by Eurocopter (now Airbus Helicopters) which had assumed design responsibility from Aerospatiale. The first of 24 upgraded HC.2s was delivered to RAF Benson for operational trials in 2013. The entire upgrade package cost circa £300M and it’s predicted that the Puma HC.2 will remain in service until 2025. Despite five decades of service, the Puma remains a key support helicopter asset with 33 and 230 Sqns, as well as 28 Sqn, which flies the Puma and Chinook as the support helicopter Operational Conversion Unit (OCU).

The table below outlines Ambush Formation which flew the formation of 10 on 7th July 2021: