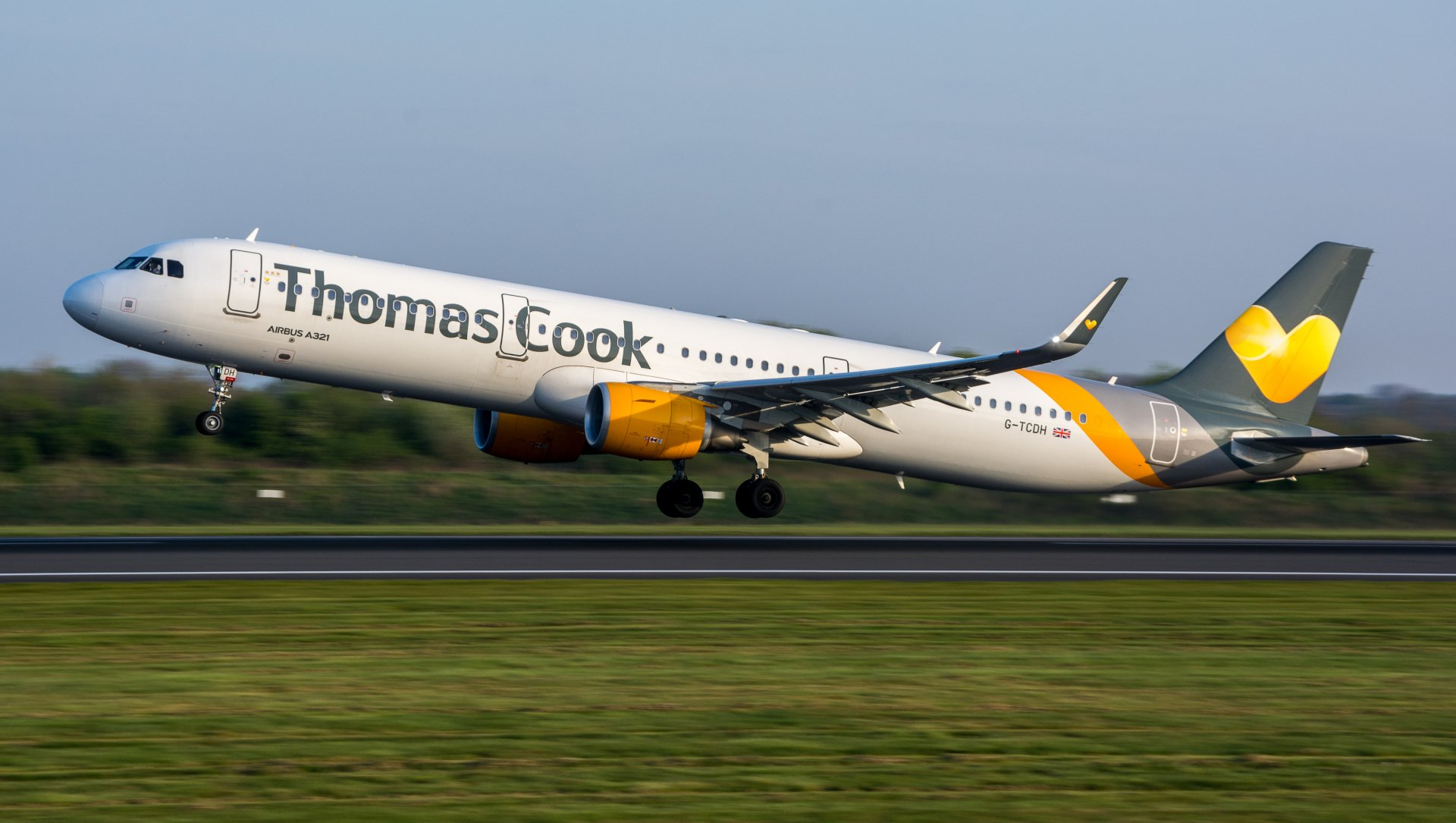 After 178 years of continuous operation, the Thomas Cook group collapsed on 23 September 2019.

A long and winding history

As with most UK airlines Thomas Cook has a history that could be explained in several tomes.

Needless to say Thomas Cook Airlines ended up with a hodge-podge of aircraft from all of these companies in its fleet.
Operating 113 aircraft over 16 years Thomas Cook inherited a mix of aircraft, bought new aircraft and leased some in from AMCI providers across Europe.

In this retrospective we’ll be looking more closely at Thomas Cook’s UK operation, specifically their aircraft and “where are they now”.

Thomas Cook inherited A320s originally ordered by Caledonian Airways and Airworld, as well as second-hand aircraft purchased by Airtours and MyTravel Airways, as well as A321s ordered by Airworld but delivered to Airtours International Airways.

Only A321s G-DHJH and G-NIKO were left in the Thomas Cook fleet by September 2019, and current reports indicate both will be returning to the UK as freighters.

JMC’s aircraft were a mix of former Flying Colours aircraft and ones they had purchased themselves – including two 757-300s. MyTravel supplied one 757 for the new fleet.

Of 19 757-200s operated by Thomas Cook 17 are still in service as freighters, all five 757-300s continue to be operated by Condor Flugdienst (for the time being at least!) and all three 767-300s being flying with Atlas Air on behalf of Amazon Prime Air.

By September 2019 Thomas Cook had transferred a number of its A330s to partner airlines, such as Condor Flugdienst and Air Transat, and attempted to move some to its Danish airline – Thomas Cook Airlines Scandinavia – which was in the process of restarting operations as Sunclass Airlines.

These latter aircraft were not to be however, and have now ended up in storage at Newquay. Three other A330s remain at Manchester with no obvious buyer in sight, even before COVID-19’s effect on the aviation industry.

Airbus part 2(b): Standardising with the A321

In late 2013 Thomas Cook Airlines began to replace its Boeing 757s and some of its older A320 series aircraft with newer Airbus A321s – initially new-build aircraft but as time went on a number of second hand aircraft were also acquired.

By March 2017 four former Monarch Airlines A321s joined the fleet, although their service was to be short lived.

Most of Thomas Cook’s final fleet of A321s have found new homes, with only three currently in long-term storage and no new operators in sight.
JetBlue Airways acquired all four former Monarch Airlines aircraft though only three have been delivered. The fourth continues to be kept in an airworthy state.

Since March 2003 Thomas Cook Airlines have operated 91 airframes, and from 2017 at least, leased in a further 22. Of the 91 operated directly:

If you’re looking to see an aircraft still in Thomas Cook colours for the last time, your best bets are either Manchester or Newquay where at each three A330s reside awaiting new owners, or in Vietnam where low-cost carrier VietJetAir operate six A321s still in basic Thomas Cook silver and yellow.

Of course doing so will have to wait until the COVID-19 pandemic is over.