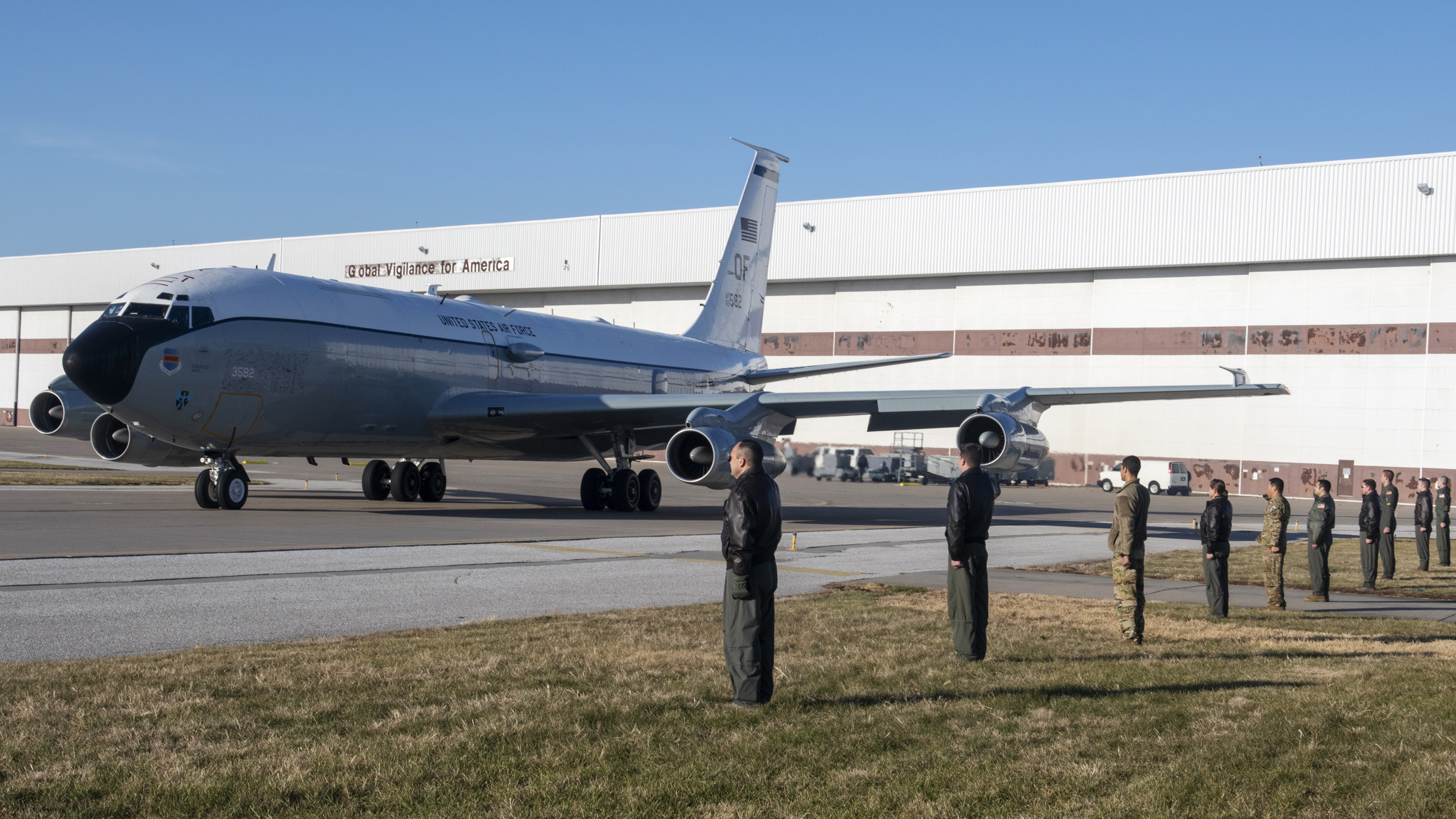 After almost 50 years in Air Force service, “aircraft 582” was retired during a ceremony at Offutt AFB, Nebraska on 13 November 2020.

“Eventually all good things come to an end,” said Col. John Litecky, 55th Operations Group commander. “All in all, tail 582 has flown over 29,689 hours, which includes 72,251 landings for our Air Force in all her shapes and forms, and we are truly grateful for her service.”

The aircraft’s official final flight with the 45th RS, commonly known across the Air Force as its fini-flight, took place Nov. 2, 2020. Upon landing, 582 received the traditional water salute, where two of the base’s fire trucks shot water over the aircraft, creating an archway.

62-3582 departed Offutt on 16 November for L3Harris ISR Systems’ facility at Majors Airport, Greenville, Texas using the callsign “Lucha 82”. Lucha is Spanish for struggle, which may or may not refer to the maintenance issues ‘582 had during its life at Offutt!

“This particular WC-135 aircraft has proven finicky over these last two decades for our crews and maintainers,” said Lt. Col. Andrew Maus, 45th Reconnaissance Squadron commander, “but nonetheless, it served our mission well.”

Whilst at Majors Airport the aircraft will have its mission systems; the external airfoils and sensors and internal computers, sampling and containment equipment removed. These systems will be installed on new WC-135R aircraft – of which there are to be three converted from KC-135Rs.

Boneyard Safari over on Facebook has some photos of its arrival at Majors:

Built as a Boeing KC-135B Stratotanker, the aircraft was not in fact a refuelling aircraft but rather an airborne command post. Soon after delivery the type was renamed EC-135C “Looking Glass”, where it spent its operational life on 24/7/365 alert, ready to get airborne in the event of nuclear war.

Beginning in February 1961 the “Looking Glass” mission saw at least one EC-135 airborne 24 hours a day, every day of the year. For 29 years the EC-135C flew every single mission, bar one which was flown by an E-4B under test, before being replaced by the US Navy’s E-6B “TACAMO” aircraft.

As the type designation suggests, WC-135s were built for weather-reconnaissance and air sampling missions, and ten C-135B transports were initially converted for the role.

By the early 1990s the weather-reconnaissance mission was transferred to WC-130 Hercules and P-3 Orions of the USAF and US Navy, and the WC-135 fleet was retired. Five aircraft were retained and modified for further missions, with 61-2667 upgraded to a WC-135W in the air-sampling role.

The Constant Phoenix’s modifications are primarily related to the aircraft’s on-board atmospheric collection suite, which allows the mission crew to detect radioactive debris “clouds” in real time. The aircraft is equipped with external flow-through devices to collect particulates on filter paper and a compressor system for whole air samples collected in high-pressure holding spheres. Despite the different designations, both the C and W carry the same mission equipment (similar to the RC-135V and W aircraft).

The interior seats 33 people, including the cockpit crew, maintenance personnel, and special equipment operators from the Air Force Technical Applications Center. On operational sorties, the crew is minimized to just pilots, navigator, and special-equipment operators, to reduce radiation exposure to mission-essential personnel only.

Although possibly some of the least-used of the special C-135 variants operated by the 55th Wing at Offutt AFB the WC-135s have one of the most important worldwide missions, from nuclear treaty compliance to weapons tests and accidents – such as the fallout from the Chernobyl disaster in 1986.