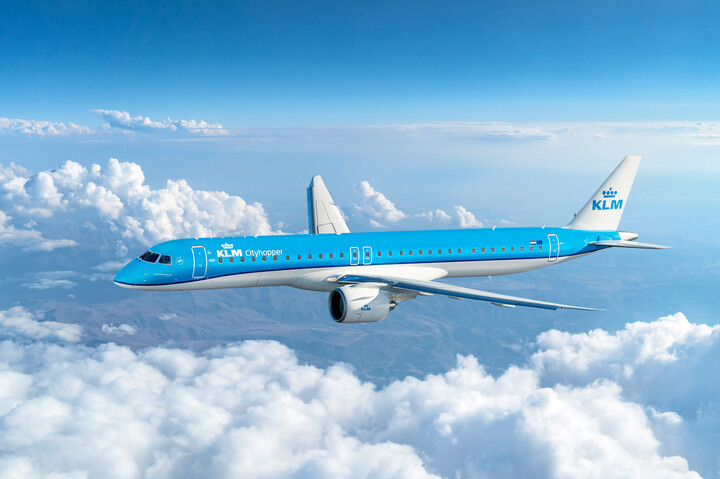 KLM Cityhopper has accepted its maiden Embraer E195-E2 at a ceremony held at the Brazilian manufacturer’s São José dos Campos site. The single-aisle jet is the first of 25 examples the Dutch airline has on order, while it holds options for ten more.

The new E195-E2, which is to be registered PH-NXA, is configured with 132 seats in a three class layout. When it enters service, the E2 will accommodate 20 Business Class passengers, eight in Economy Comfort, and 104 in Economy. The addition of the largest member of the E2 family is a major upscaling over the current two-class, 100-seat E190 and is more in line with KLM’s 14 Boeing 737-700s which have been equipped with a two-class interior seating 142.

The 25 aircraft deal is split between ICBC Aviation Leasing and Aircastle, with the former leasing ten of the Pratt & Whitney PW1900-powered jets with the remainder coming from Stamford, Connecticut-based Aircastle.

“The new E2 is really going to make a difference,” said Warner Rootliep, KLM Cityhopper Managing Director. “The addition of the E195-E2 to our fleet is a vital part of our plan to reduce our carbon footprint at least 50% per pax/km by 2030. The 195-E2 is not only an economically attractive aircraft, it also fits perfectly within our ‘Fly Responsibly’ sustainability initiative – Fleet renewal is currently the largest contributor to CO2 reduction.”

View Profile | View all posts by Threshold.aero
Atlas Air have ordered the last four Boeing 747s to be built.
Uep Airways will debut in 2021 in the Balearic Islands